For the purposes of this article I will be using the descriptions and the skills as they stand in the Pathfinder Role-playing Game. Now, with that in mind, you’re probably wondering what exactly I mean by “unstoppable” in reference to Bluff, Diplomacy, and Intimidate. Well, I mean that in combination, and often separately, if your score is high enough in these skills you probably don’t need anything else, including combat prowess. Of course a bold statement like that is bound to have a few caveats:

1. Your Dungeon Master plays by the rules as they are written. No finagling or deliberate manipulation to change outcomes. (This is probably the hardest variable to control.)

2. You can intelligibly communicate with whatever it is you’re using these skills on. (This can be taken care of in game.)

3. The creature your communicating with is intelligent enough to understand you. (Why are you fighting stupid things anyway?)

4. You have the time required to use the skills. (Obvious, but necessary to mention.)

So, all in all, a bit much to swallow, but let me explain myself before you condemn me to some unspeakable hell dimension.

What can Bluff do fo 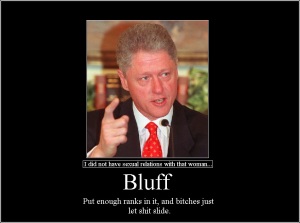 r you? Want to convince an aging aristocrat that you’re his long lost son and heir to the family fortune, or perhaps tell a group of bandits that stepping within ten feet of you will result in their immediate and rather violent deaths…Bluff can do that. Want to convince a shopkeeper that you already gave him money for the overpriced item, or persuade a bank guard that you’re a government official here to count all the money in the vault…Bluff can do that. Want to tell some dude that these are not the droids he’s looking for, well, Bluff can do that. The Bluff skill is the mechanic of lying in Pathfinder and if you’re good at it, well, your imagination really is the limit.

The restrictions of the Bluff skill are usually placed by the Dungeon Master, which again is hard to control, but if your DM is a stickler for by the book play, then you shouldn’t have any trouble. The problem comes in the fact that the Bluff skill is an opposed skill check rather than a set DC. This adds an unknown

variable that can’t be avoided, making it, in my opinion, the weakest of what I’ll call the “interaction skills.” The bluff skill is also often modified in direct relation to the believability of the lie being told. Now, while some might see this as bad, I see it as a loophole, simply because even an impossible lie, something that is ridiculous and unbelievable, can be made at a -20 penalty. This is an extremely steep penalty, but it is allowed under the rules and any self respecting skill-monkey could have a total score of 23 in the bluff skill by 10th level…more if they wanted. That means that even with an impossible lie a 10th level character still has a bonus of +3 after taking the penalty. It’s not much, but it’s a bonus, and it’s worth pointing out that in a world where there’s magic being thrown about, most lies you tell aren’t going to be impossible.

So, as a 10th level character with a 23 in the bluff skill, I wouldn’t go around telling a Balor Demon any impossible lies (the DC being 50 before it rolls an opposed check), but otherwise, have some fun.

And by fun, I mean that the Balor Demon is back and it’s pissed off; but don’t worry, you

have 23 in the Intimidate skill. The Balor Demon has 20 HD and a Wisdom modifier of +7, add 10 (and another 4…it’s likely bigger than you) and you have a DC of…41. Ouch! Harsh! You only have a 15% chance. So why even try it? Because though it may only happen 15% of the time, you can still make a Balor your BITCH!

The Intimidate skill allows you to take any creature that can understand you, be it a red dragon or a human commoner, and make it acquiesce to your will. Pretty standard for an RPG, and pretty ridiculous when you consider one of the most powerful extra-planar demons has a 15% chance of acting gimp to a 10th level character. Now the creatures new “gimpy” attitude only lasts for 1d6 x 10 minutes, but that gives you time to thoroughly demoralize or otherwise “get information, make it take actions that don’t endanger it, and have it offer other limited assistance.” Once those 1d6 x 10 minutes are up, the Balor Demon will treat you as “Unfriendly” and may report you to whatever body of extra-planar creatures listens to the the sad tale of how a 10th level character made him wear a ball gag.

And if you think that’s powerful…

Why is Diplomacy awesome? Glad you asked. The Diplomacy skill in Pathfinder is used for gathering information, making otherwise obstinate NPCs agree with you, negotiating terms (whatever they

may be), and in general, determines the likeability of your character in a given situation.

Anyone who’s played 3.0 – 3.5 Dungeons and Dragons knows that if the Diplomacy skill was played as I’ve suggested it should be, “by the book,” then it is truly an unstoppable beast. Don’t just believe me! Read this and you’ll change your mind (The Alexandrian).

Pathfinder has put some restrictions on the diplomacy skill, so that it’s slightly less broken than it once was (that’s not to say that it’s not still broken, because it totally is). Diplomacy now has a duration of 1d4 hours instead of being limitless. You can now, no matter how charismatic you are, shift s

omeone’s opinion of you only two steps on the attitude chart (seen on the right), and you can only attempt to shift an NPC’s attitude once in a twenty four hour period. They also took out the option for a “quick diplomacy check,” which is to say, you can’t change an NPC’s attitude without meeting the one minute requirement. Even with these changes you can still shift someones attitude from “Hostile” to “Indifferent” fairly easily, which allows you to start making requests of the NPC target with the now much lower starting DC of “Indifferent.”

I’m just going to keep the Balor train going to drive my point home. Your standard Balor Demon has a Charisma score of 29, giving it a +9 to its charisma modifier. This means that your 10th level character, with a 23 in the diplomacy skill, needs to make a DC 39 to change the Balor Demon’s attitude from “Hostile” to “Indifferent.” Difficult? Yes, but you’ve got a 20% chance of making that roll, and if you do make that roll, now you can start making requests…of the extra-planar being that, for some unknown reason, finds the problems of a 10th level PC not only interesting, but worthy of his personal time.

What You Don’t Know, But Probably Suspect

These skills are nigh unbeatable when you consider, and I have, that this 10th level character I’ve been using as an example…is not optimized. An optimized 10th level character could have dropped their 2 ability points into charisma for a 20, gotten a +6 charisma boosting magic item for a 26 (giving a +8 modifier), maxed out their skill ranks for +10, smacked any one of the personalized skill feats on top of the Skill Focus feat (netting them a +10, just from feats), giving them all told…wait for it…a 31, before they touch the dice, 32 (or more) if the DM allows traits. This isn’t even taking into account any spells or other magic items that might be giving the character a skill boost.

So, that Bluff check that was nigh impossible to make against the Balor Demon…possible.  Improbably.  Suicidal!  But possible. That 15% chance you had with Intimidate to make the Balor your gimp…now a 55% chance. And that 20% chance with Diplomacy of changing the Balor’s attitude from “Hostile” to “Indifferent” is now a 65% (I like those odds).

What are we to conclude from this? That changes need to be made, obviously, but that is not my department (though I hear that ElCrabofAnger may have something in the works). 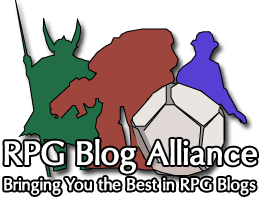